Sailors, both amateur and professional alike, have always seen a transatlantic crossing as a sort-of rite of passage: it’s what separates the men from the boys, the women from the girls, and the sailors from the land-lubbers (that last one was mine).

But how long does it take to sail across the Atlantic? Short answer: about a month. Long answer, well…

How Long Does It Take to Sail Across the Atlantic?

To answer the question, ‘how long does it take to sail across the Atlantic Ocean?’, one needs to look at two things: the vessel you’re using, the weather, and the route you’re taking. The Atlantic Ocean is the second largest ocean in the world; it’s no spring chicken, many people die trying to pull off a transatlantic crossing. But of course, with the amount of information out there plus the number of experienced people you can get help from, your chances of death are minimal.

In ye olden times, it took Christopher Columbus 5 weeks to get from Spain to the New World, and even now, it still takes around 3 to 4 weeks for a person on a sailboat to cross the great blue Atlantic. Of course, the fastest transatlantic sail record is 3 days, 10 hours, and 4 minutes by the ocean liner the U.S.S United States, while the fastest transatlantic sail by a sailboat (in this case, a competitive trimaran) was by the BanquePopulaire V in 2009 which took 3 days, 15 hours, and 25 minutes.

For normal sailors, however, sailing across the Atlantic will take 3 to 4 weeks.

Why Does Sailing Across the Atlantic Take a Month?

There are several ways to sail across the Atlantic; however, the fastest, most efficient way to do it is two-fold:

Because of trade winds, a transatlantic crossing going from East to West (Portugal to the Windward Islands in the Caribbean) will usually take around 3 weeks and 6,800 km. In good weather, that’s about 20 days of solid sailing, and while it’s not the easiest thing in the world, it would be a pleasant experience for both novice and expert sailors alike.

In general, however, sailors measure distance and not time, because distance is constant while time can vary depending on the weather. Sailors will use the Nautical Mile, with 1 NM equal to 1.1508 miles OR 1,852 meters.

While a transatlantic crossing is generally reserved for highly-experienced sailors, it doesn’t mean that novice skippers can’t sail with more veteran salts; after all, the best experience is experience itself. Transatlantic crossings can be one of the most challenging things you’ll ever go through, but with the right route, frame of mind, and of course, timing, it’s also the most rewarding.

While crossing the Atlantic Ocean usually takes about 3-4 weeks, it depends on the route you take. In general, there are two main routes that sailors use:

The Northern Passage, which starts from the West

The Southern Passage, which starts from the East.

When you see the routes on the map, it doesn’t look like the shortest route as the crow flies; in fact, it looks like a roundabout way of going to places. However, those routes are there for a reason: they’re the most forgiving sail routes for most ships, and has been in use for more than 500 years. Both routes are governed by the Trade Winds, so it’ll be wise to take that into account. Here are more details about each route:

The Northern passage (Sailing from West to East)

The Northern Passage route starts in the island of Bermuda, some 768 miles off the coast of North Carolina. This is one of the best places to start a transatlantic crossing because of the prevalence of Westward blowing winds. Most sailors from the U.S. will usually start somewhere in Florida, down to the Caribbean, then to Bermuda where the real journey can begin.

From Bermuda, you’ll want to set sail to the Portuguese Azores, a volcanic archipelago and autonomous region of Portugal some 900 miles off the coast of Portugal. From Azores, it’s a hop-and-skip away to Lisbon. These are the distances you need to cover:

From the Caribbean to the island of Bermuda: 850NM (around 5 to 8 days of sailing)

From Azores to continental Portugal: 738NM (around 4 to 7 days of sailing) 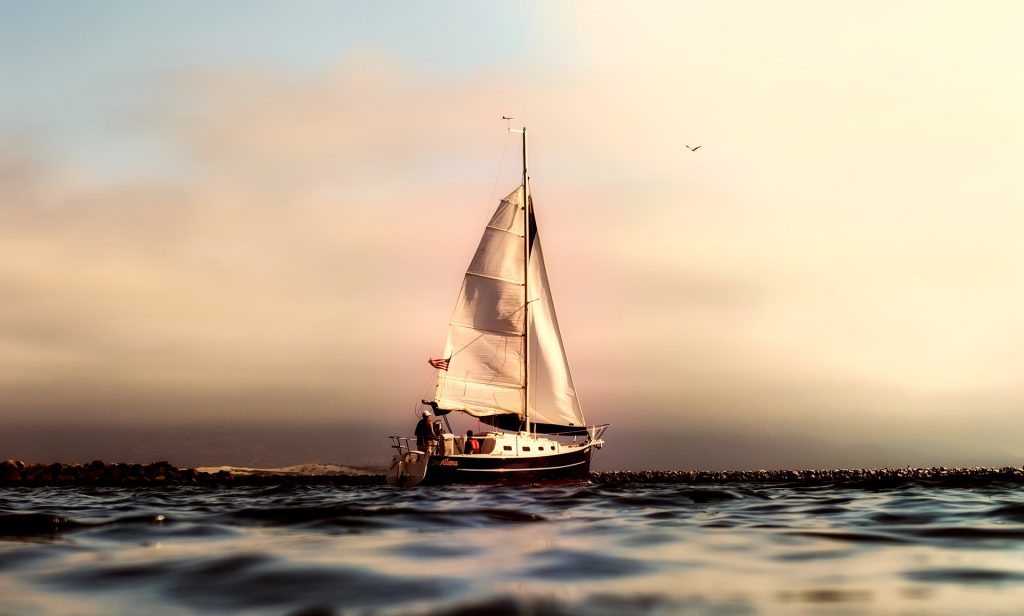 In general, it’s always best to give yourself and your crew an extra 3 to 10 days of allowance when plotting your journey. This will give you some leeway to account for the weather and mechanical breakdowns in the ship. In general, the Northern Passage will take around 3 to 4 weeks, although it does take a little longer (by a few days) than the East-to-West route.

The Southern passage (east to west)

The more popular of the two sailing routes (because it’s slightly faster), the Southern Passage generally starts in Portugal, where sailors must go southeast to the Canary Islands, some 60 miles off the coast of Western Africa. From there, you’ll set sail making a stop at Cape Verde before heading off to the Windward Islands in the Caribbean. Some sailors, however, go straight to the Windward Islands from the Canary Islands, although this is only recommended for highly seasoned skippers. These are the distance covered by the Southern Passage:

Portugal to the Canary Islands: 750NM (around 5 to 7 days of sailing)

Canary Islands to Cape Verde: 850NM (around 5 to 8 days of sailing)

Canary Islands straight to Windward Islands: 2700NM (around 16 to 21 days of saiing)

In summation, the Southern Passage takes around three to four weeks (give or take a few days) to cross around 4,000 nautical miles.

This is why many competitive sailors will usually cast off around late November to arrive either in the Caribbean or Portugal by mid-December. Some sailors, on the other hand, will cast off in January, when the Trade Winds are at their strongest.

What are Trade Winds?

We’ve been talking about Trade Winds since the beginning of the article, but what are they exactly? Well, the Trade Windsare specific weather phenomena that occur in a predictable pattern all across the Atlantic. It was first described in the 16th century by European explorers and were initially called ‘wind roads’. Since then, they’ve been used by merchants and explorers to make the perilous journey from the Old world to the New.

The Trade Winds are born from the hot air that rises from the tropical regions that cools down significantly as it reaches higher altitudes. This cooled air is then generally deposited in the poles, with the whole process creating winds. Coupled with the Coriolis Effect (that is, the phenomena of the Earth’s Rotation), and you have winds that are both measurable and predictable.

So How Hard is It to Cross the Atlantic?

Honestly, sailing across the Atlantic is a very challenging experience. It isn’t impossible, but without the right mindset, crew, equipment, boat, and timing, it can be fatal. However, cover all of that, and you’ll be going the adventure of a lifetime.